A Boy, a Girl and a Bike 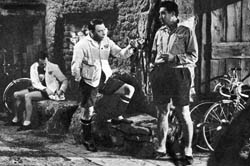 An amiable comedy romance directed by Ralph Smart from a Ted Willis screenplay. Like many of Ranks comedies of the time, although nostalgic today, they were too cosy and dated at time time of release.

Sam Walters (Patrick Holt) is captain of a Yorkshire cycling club, the Wakeford Wheelers, of which his fianc?e, Susie Bates (Honor Blackman), is a keen member. During a club run one Saturday a sports car, recklessly driven by David Howarth (John McCallum), forces the cyclists into a ditch. David is soon laughing on the other side of his face, however, for his engine fails a little farther on, and the club rides merrily on with a chorus of taunts. ?Why don’t you sell it and buy a bike e ” cries Susie. David looks up to make a retort, but when he sees her he is at a loss for words. “I might do worse!” he mutters, as she rides off out of sight.

A few days later he encounters her again, for his car catches her mudguard and throws her off. He is very contrite, carries her cycle to the repair shop, and tells her that he would like to see her again. She says that the only way to do this is for him to join the Wakeford Wheelers – which he does. Wakeford enters its crack team in the Moss Moor open race, and David turns up in plus fours riding an old fashioned bike. While the race is on, the cycles are guarded by Ginger (Margaret Avery), who in her desire to see the finish leaves them unprotected. This is a chance for Charlie Ritchie (Antony Newley), Ginger’s boyfriend, who owes Bill Martin (Maurice Denham) money and steals one of the cycles and trades it to Martin in settlement of his debt. Martin rebuilds the cycle, and sells it to David, who has become a keen member determined to win a place in the racing team.

At the club’s annual weekend camp, Charlie is horrified to discover that David’s new bike is the one he stole and that it could still be recognised as such. He decides to steal it and destroy it. He rides off, but is chased by the club members, who finally catch him and force him to confess. As a result of this, Bill Martin is arrested. Another arrest follows, for on the eve of the next big race the club’s crack rider, Bert Gardner (Cyril Chamberlain), is identified as a deserter from the army. David takes Gardner’s place at the last minute and wins the race for Wakeford in a thrilling finish. He does not, however, win Susie, who marries Sam and lives happily with him in a little house just suited to a boy, a girl and a bike.